It would be recalled that there was an uproar among Nigerians after bullion vans were sighted entering the compound of the National Leader of the ruling All Progressive Congress(APC), Bola Ahmed Tinubu.

Popular human right activist, Deji Adeyanju, has submitted a petition to the Economic and Financial Crimes Commission(EFCC) over the said incident.

“PETITION TO INVESTIGATE THE SOURCE OF MONEY CONVEYED IN BULLION VANS TO THE HOME OF ASIWAJU AHMED TINUBU ON THE EVE OF 2019 PRESIDENTIAL ELECTION “The Economic and Financial Crimes Commission is empowered by law to prevent, investigate, prosecute and penalise economic and financial crimes and is charged with the responsibility of enforcing the provisions of other laws and regulations relating to economic and financial crimes. “It is on this basis that we write to petition the commission to launch an investigation into the appearance of Bullion Vans in the compound of a private citizen, Asiwaju Bola Ahmed Tinubu on the eve of 2019 presidential elections. This subject matter is not new to you and several Nigerians have repeatedly drawn your attention to this. I have decided to take up your challenge after you called for a petition through your social media account on Twitter.

“The commission would recall that it was reported all over the news that Bullion Vans allegedly containing an undisclosed amount of cash were seen entering the home of Bola Ahmed Tinubu, former governor of Lagos State on the eve of Nigerian presidential elections. Tinubu himself admitted to this fact while responding to question by journalists. “‪It is pertinent to note that, Section 7 (1) (b) of EFCC Establishment Act, 2004 gives the commission the power to investigate properties of any person that it appears to the commission that the person’s lifestyle and extent of the properties are not justified by his source of income.

Copy of the letter below: 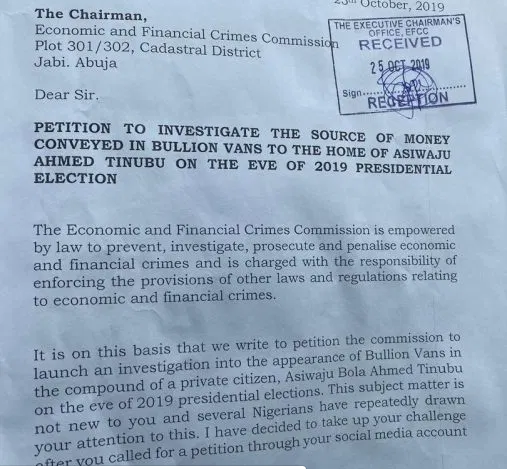