A pit bull dog has been killed after devouring the head of a 1-year-old baby in Mambilla Barrack, Abuja.

The dog was said to be owned by one Regimental Sergeant Major (RSM) in the barrack.

According to reports, the baby was playing outside when the dog sighted him and pounced on his head.

Upon sighting this, residents quickly mobilized to the area with planks and started hitting the dog but it held on to the baby’s head until it was beaten to death.

The little boy was rushed to the hospital where he was confirmed dead, despite best efforts. 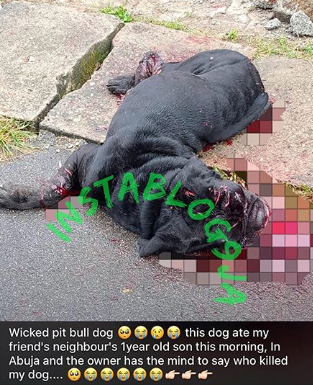