Young people of today are faced with situations that pose as bottlenecks for the ultimate goal of survival. Today, many youths find themselves doing some jobs that not only pose danger to their health, but ultimately reduce the creative power of their minds. The quest to understand these young men who find themselves going through the hard way to make ends meet, informed the decision of  Information Nigeria’s Michael Isaac to take to the streets of Lagos to listen, and tell the stories of these young men, known as porters, and the service they offer, known as porterage.

On a sunny Friday morning at Daleko market, Oshodi-Isolo Local Government area of Lagos State, traders are seen going about their businesses and having their random small conversations, but one thing, however, would catch me in awe – men carrying nothing less than two bags of rice on their backs, almost running and resounding only one word, “ago”, which I have come to learn is Yoruba for ‘give way’.  A word which they scream to ward off human obstacles on their way. These are the ones we are interested in ⁠— ‘The Alaburus’ ⁠— as they are commonly called.

Watching them go about their business amongst the other traders who did nothing but just received calls and punch numbers on the calculator prompted me to speak to a few of them. It’s amazing how people are ready to talk about themselves and their job.

Lanre, who happened to be the chairman of the Alaburus at Daleko Market, was both chatty and expressive of his ideas as he was also surrounded by a team of men who also wanted to say one thing or the other in addition to what their chairman had said.

“Wetin make you start to dey do alaburu as work”, I ask after I had introduced myself. His smile in response to the question was heartwarming and I could see regret in his eyes as the smile waned off in less than a minute. I watched and listen to him explaining how he had dropped out from school just a year away from the finish line, he had also hinted that, even though he had never liked school, he still regrets that he wasn’t patient enough to finish and, being a dropout in a society that has no opportunity for people like him, Alaburu was his closest option for survival.

“Me I no fit thief and I no even sabi how to use laptop, talk less of doing yahoo-yahoo wey many boys dey do now. I no go school o but my hand and my whole body still dey work na why I go use am make money wey me and my children go take eat.’

While many of them attributed they’re doing the hard job because they had no proper education, Sulieman, one of the men who was with Lanre thought differently. He, however, attributed that for him, this was what was passed down from his father, as his father had also been a porter back in Kano State. On saying this, the rest of the men under Lanre’s unit laughed at him.

Sulieman talked about how hard it has been for him, and shared a moment when he experienced a breakdown because he had carried three bags of rice at a time. It was after his breakdown amongst others that made their Chairman, Lanre create a policy that only allowed them carry two bags at a time.

“If government say dem wan put eyes for this una alaburu business now, how you think say dem fit help?” I ask Lanre. ” He looked at me and smiled again saying: “Government ke! Na only people way go school dem they help.” He hinted that over the years, they have tried to form and start an association for their business and on every occasion, their request to be recognized were turned down. His squad also agreed with him as they all nodded in support.

The Alaburu business is an irregular one that involves them carrying loads for customers and traders from one point to another using whatever means they seem fit, usually their backs. Each item has a fixed price but sometimes, they charge higher or lesser, depending on the distance they have to cover. Lanre also hinted that one can typically make fifteen thousand naira in a day if one is resilient and hardworking.

On several occasions, these young men have experienced medical breakdown for the heavy load they put on their backs and to them, it doesn’t matter as they are all just striving to survive. Just like the NURTW and other unions, they also want to be recognized, however, on every level, their kind of trade seems to be unusual.

Moving to Oshodi, the story is different. While the Alaburus at Daleko had some level of organization, the men at Oshodi didn’t. They source out their customers themselves, unlike at Daleko where the customers and traders usually come for them.

If you have ever been to Oshodi, you won’t miss the sight: young men struggling behind moving vehicles that have goods in the trunk, you will see them chasing after these vehicles just so they can render their services to make ends meet for themselves and their families.

Speaking to one of them who identified himself as Musa, I was able to understand that in the end, this was only just what seemed right for him to do in earning a better life for himself and his family. When I asked Musa if he were to be presented with a better opportunity if he’d take it? He didn’t hesitate to say ‘yes’

For Musa, it was the only way he had known to survive as he hinted that he was neither educated nor skilled in any creative function: “I no go school and as I dey like this sef, I no sabi do anything if no be this work wey I dey do. Make I no lie, e no easy, but na wetin me I fit do be this” He went further to share a story of when the job affected his health: “E get the day wey my back break sef, that same day, tire roll for my leg as I dey hustle for market. As I carry the bag load put for back, next thing I know my back just shift.”

Contrary to popular beliefs that these men are uneducated is why they are doing this kind of job, the truth still remains that a good number of Nigerian youths are living in ignorance of the opportunities that the government has put in place for Nigerians, educated or uneducated, many don’t know this.

Should they be blamed for their ignorance?

The government has on countless occasion made these opportunities quite hard to access as if they are almost invincible and oftentimes, if the likes of Mr. Lanre, Mr. Sulaiman and all the Alaburus in Oshodi and Daleko put together could find them, the administrative bottlenecks involved are just discouraging.

Speaking with Mr. Lanre who had come to the conclusion that the government can not even help them or empower them, it can easily tell us how much distrust many youths have on the government.

It’s a tough life for them, but just as Mr. Lanre had said to me earlier: “No pain, no gain.” 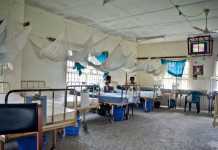 Second Phase of Vaccination: How Far? 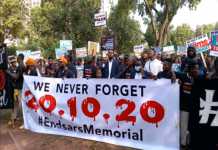 One Year After, Nigerians Demand Justice For Victims Of Lekki Toll Gate Shootings