M.I Abaga has reacted after his colleague, Vector leaked all their private message starting from 2015.

This is coming after Vector had released a diss track, titled ‘Judas The Rat’ (Pastorson) in a renewed fight.

The rapper made sure to attack his colleague before releasing the private message the latter had sent him.

The chat shows that Vector had slid into M.I’s DM first requesting for a collaboration with him.

In a bid to sign Vector to Chocolate City record label, M.I rubbishes the former’s team and offered him 20 million naira.

After the messages had leaked, the rapper starts to clear their chats.

Read Also: Tacha Hugs Mercy, Isilomo As She Parties With Other Housemates (Video)

Of course I did.. didn't know that we were leaking DM's in our 30s .. would advice everyone messaging you to do same https://t.co/C1TJ1zmq6L 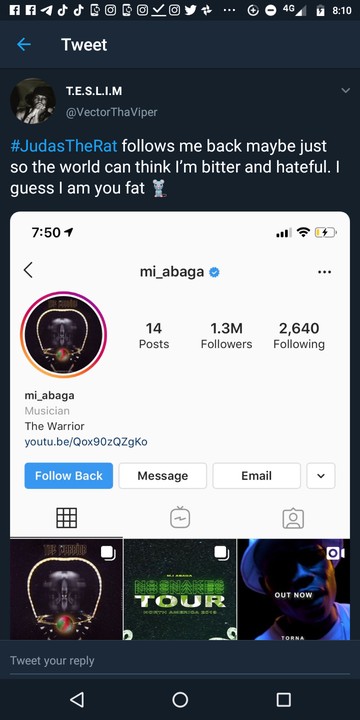