Davido‘s baby mama, Chioma Rowland Avril, is known for staying away from social media drama but the singer’s wife replied an internet troll who queried if she is the first to get pregnant for the superstar after sharing a throwback photo of her baby bump during pregnancy days.

Before Chioma reacted, one of her fans reacted by saying all she could see in the troll’s profile photo is her big nose and wack make up.

The fan then replied to the troll that Chioma is the first, before asking her to deal with her ‘mid-life drama.’

Chioma, on her part, reacted by saying the troll is following her and sending her heart emoji.

See screenshot of their conversation below: 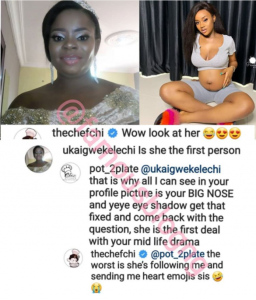