The reality TV star just signed a new deal with premium hair maker, Royal hairs, and this has got reactions from various celebrities.

Prominent among the celebrities are Nkechi Blessing and Rita Dominic.

Nkechi Blessing in her reaction said: ‘we can never get tired of congratulating you, my queen.’ Rita Dominic on her own part says: ‘your name speaks for itself, dearie. 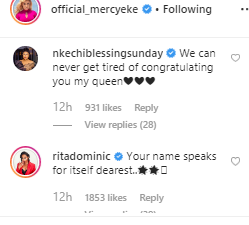