Nigerian musician, Davido recently revealed that disqualified Big Brother Naija housemate, Tacha happened to be one of his favorites on the reality show.

The ‘Blow My Mind’ crooner made this known in a recent tweet where he revealed that he is supporting Omashola to emerge winner of the show.

“I had three friends in the big brother house and I said to myself, it wouldn’t be fair if I chose one.“The 3 were Kim Oprah, Tacha and Omashola but since it’s just down to one, it’s only right to say Omashola for the win!”

Information Nigeria recalls the singer had disclosed that he knew two of housemates before they joined the reality TV show.

According to Davido, he knew Omashola in South Africa while he found out about controversial female housemate, Tacha when news spread that she had a tattoo of his face on her chest.

Read Also: “Men Only Need Space To Have Sex But Women Need Reason To Have Sex”, Says Dayo Amusa 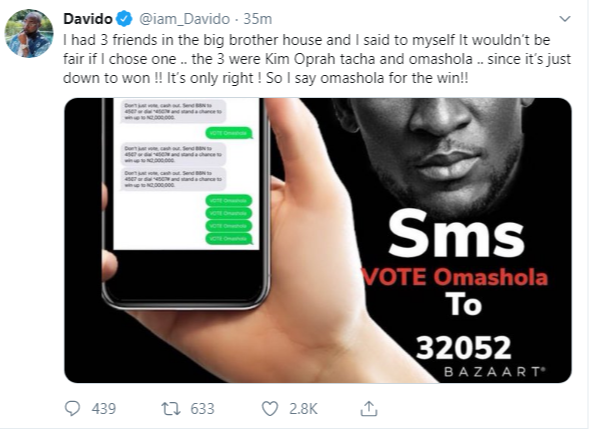