Ex-Big Brother Naija housemate, Venita has blasted Omashola after he called her “Sbhonyonyo” which means, “The Ugliest Mermaid in the World” while he was on stage.

Omashola was very excited to have Venita in the house as the duo also shared a kiss on the first day of her arrival.

Venita started clinging to Frodd and this caused the Warri man to feel betrayed because she had turned down his amorous display of affection.

During the Live Grand Finale of Big Brother Naija reality show, the host, Ebuka Obi-Uchendu asked Omashola if there was going to be a future between himself and the mother of two.

The 3rd runner up, however, said replied in negative, describing her as a ‘Sbhonyonyo’.

Although he didn’t say the meaning on stage, he asked the host to find out for himself.

“I believe in a Nigeria, where when a woman says “NO”, she should NOT be subject to sexual harassment, physical inappropriateness, verbal or tribal abuses.”

Seeing this, A web user to tried to justify Omashola’s action and make her understand the reason behind his remark.

According to the user:

“He’s not angry you said “NO” he questioned your loyalty to your team and betrayal. Don’t narrow it to gender context.. I’m Delta and also Urhobo, I supported you two but let’s be honest with instead of throwing sub.. then you came to the last Saturday night party and start telling him you are angry with him, now you are playing the NO card when you know the origin of the anger. It’s not about your NO but spitting him with the green Band.”

“yes I wear my green band because my team genuinely cares for me and I for them. There’s footage of Seyi and Ike discussing how I did NOT share info across BOTH teams!! I was NEVER given a red band by any member at ANY point of my stay”.

Another web user, who pleaded with Venita to forgive Omashola for what he did, wrote:

“Please if this is about yesterday’s talk, please I beg you let it go! Person not wroth it, comment dumb! I wish you knew where you are placed in our eyes. Lion no dey follow pig drag gutter o.” 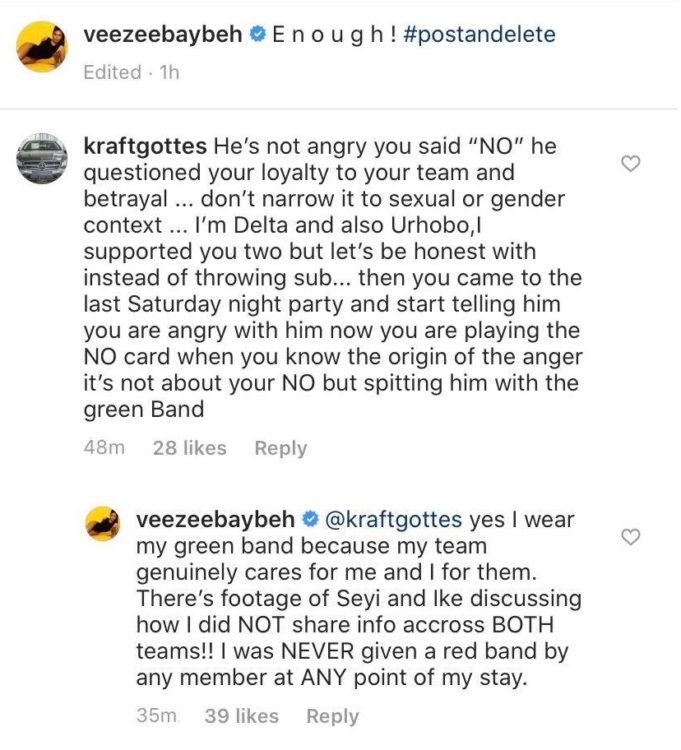 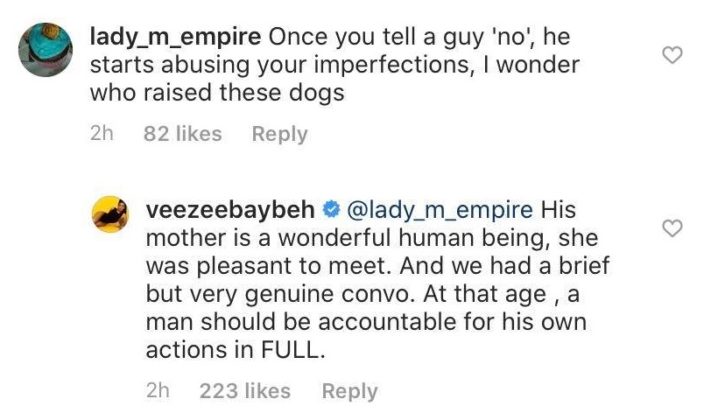