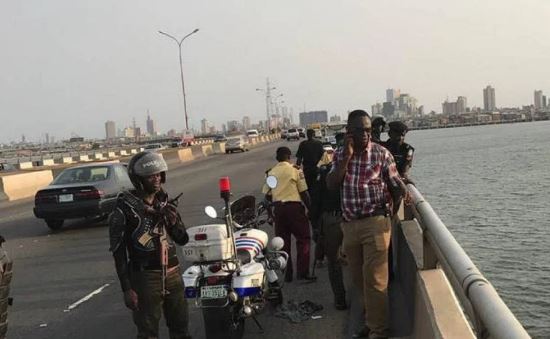 Some officials of the State Emergency Agency, LASEMA, on Thursday, rescued a young man, identified as Ayinla Rilwan, from committing suicide by diving into the Lagos lagoon on Third Mainland Bridge.

Rilwan was said to have been rescued around 9am on top of Third Mainland Bridge while contemplating committing suicide.

When he was interrogated, Rilwan’s words were said to be incoherent, suggesting that he could be mentally unwell.

“Upon receipt of distress call from control room of a man roaming around the edge of the railings of the bridge, we raced to the scene only to find the man in an attempt to jump over the railings.

“And after awhile, we able to pacify him, and subdued him before taking him away,” narrated by LASEMA Public Relations Officer, Nosa Okunbo stated.

Read Also: LASTMA Official Lands Inside Lagoon After Being Hit By Speeding Driver

The man, said to be in his late 20s, was thereafter taken to the Ministry of Youth and Social Development for rehabilitation.

However, LASEMA team was later asked to take Rilwan to the Rehabilitation and Training Centre at Majidun-Owutu, Ikorodu, Lagos.