A Twitter user @ambode observer has taken to the micro-blogging platform to report the current governor of Lagos state, Babajide Sanwo-olu, to his predecessor, Akinwunmi Ambode.

According to the angry Twitter user, Sanwo-olu has been pointing everywhere like the famous Pointius Pilate without any result from his pointing. Salvage isn’t it?

What he wrote below:

Hello sir @Akinwunmi Ambode, Sir are you there?

E sir, I just want to inform you that since you left offis our new guvnor is just pointing everywhere like ponintius piltate but we have not seen any yangible result from his finger inside. 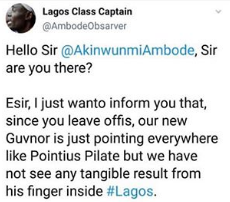