Controversial blogger, Stella Dimokokorkus, has described Bobrisky as a man with a cardiac arrest of the penis for calling her out on behalf on her bestie, Tonto Dikeh.

Tonto Dikeh and the blogger have been engaged in a long-standing war on social media in recent times.

“Tonto Dikeh you say I am full of jealousy? Then why did u go behind Ini to snatch and sleep with her boyfriend after you saw how good it was and thought he would give you the money he gave her? You broke that relationship. Isn’t that jealousy? As for bobrisky calling me out on your behalf. How and why should I respond to a man who has cardiac arrest of the blokos and now pretending to be a woman? I don’t know how to respond so I will ignore you Bob the one who is rejected in the gay community for being dirty and stinky down there.? 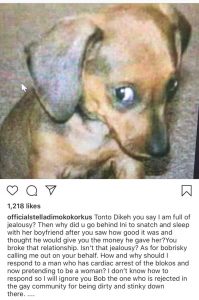