Davido‘s lawyer, The Prince, has sarcastically accused Chioma of being rude since she got the engagement ring from the singer.

Sharing a screenshot of his conversation with the singer’s wife on his social media page to prove his point, it can be seen how he was mercilessly and hilariously dragged by her.

Read Also: Nigerian Lady Queries If Chioma Is The First Woman To Get Pregnant For Davido

According to their exchange, Prince is known for wearing funny but expensive footwear and Chioma used it as an avenue to troll. 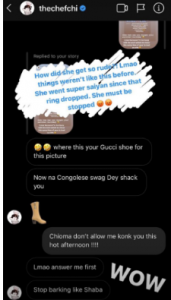