Popular Twitter user and writer, Solomon Buchi has advised men to stop being stingy to their girlfriends because she doesn’t believe in sex dating.

According to the popular figure who spoke via his Twitter handle, he further stated that premarital sex is a sin before God while premarital isn’t. What do you think of his statement???

Stop being stingy towards your girlfriend because she believes in no sex dating. Premarital is a sin but premarital spending isn’t. 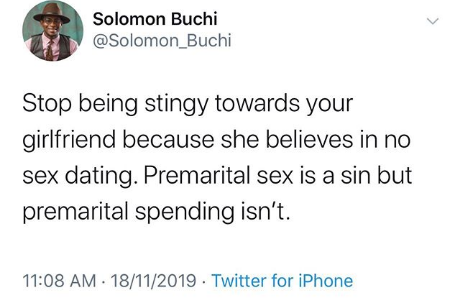