Popular Nollywood actor and scriptwriter, Alesh, took to his Instagram to share that his colleague, Mercy Aigbe, would soon turn 42 in the next coming days.

The ecstatic Alesh then described the screen diva as his baby adding that 42 already looks hot on her.

Also, he professed more love by describing him as a sweet 16.

Reacting to his comment, some fans besieged his comment section to mock him with so many of them saying he is just 26 and the actress is already 41 hence he is not supposed to be calling her baby adding that it should have been the other way round.

See screenshot of his comment and fans comments below: 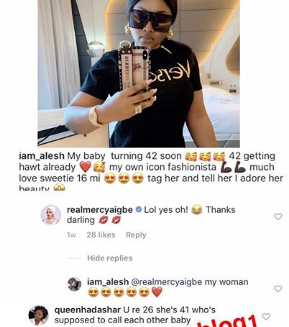