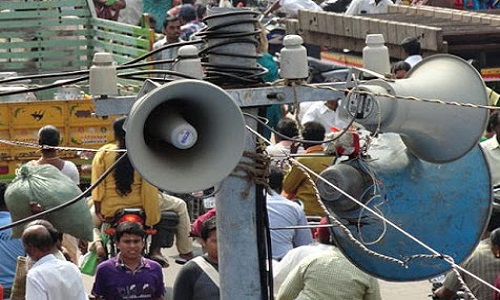 Lagos, the commercial hub of West Africa, Nigeria’s most congested city and like most will like to describe it, the city that never sleeps.

If you can live and survive in Lagos, you can live and survive anywhere in the world. The beauty of Lagos isn’t just in its architecture, or how the city combines business and entertainment effortlessly or the tall rising buildings or bridges kiss crossing, its magnificent cuisines, restaurants, malls, relaxation centres but in its diversity — It is its ability to accommodate all and sundry and still flourish.

It’s a place where you would easily find Nigerians from every region or geopolitical zone. It isn’t also unusual to bump into other Africans, Asians, Europeans, Australians and even Americans on the streets of Lagos, walking or driving freely like a familiar city in their country.

However, in all these beauty and splendour that our favourite Nigerian city holds, there is one thing that one will always find unpleasant in Lagos, ‘noise’.

Noise and Lagos are like rice and stew, married and still in love after many years.

You go to the bus stop, the bus conductor is screaming at the top of his voice, ‘Yaba Palm Groove, Onipanu’, the ‘agbero’ on the other hand, is screaming his lungs out at the conductor for his ticket fee, the bread seller is at the other corner of the road, shouting ‘Fine butter bread’, to interested and uninterested customers alike.

Read Also: Inside The Sordid World Of Child Hawkers In Lagos

Are we going to forget the soft drink and bottled water seller, who harmonises all the chaos with how cold her wares are?

Then you set off on the journey proper, from Ikeja to Yaba, that shouldn’t take more than 10 to 15 minutes, if not for the signature traffic that accompanies almost all roads in the city.
While you’re contending with the various types of honks necessary or unnecessary from several motorists, you also have to deal with ear-deafening phone ringtones of your fellow passengers and the conversation on the line that mostly sound like they’re having a fight with the person on the other end of the phone.
As if that isn’t enough, two passengers on the bus are having what should be a normal conversation but it sounds more like an orator addressing a town hall meeting — Your only prayer at that point should be that no argument erupts between the driver and a passenger or between the conductor and another passenger over change’ or even between passengers, because you are going to be in a lot of ‘noise situation’.
The noise in Lagos also extends to residential areas. On some streets, residents have to contend with the noise generated from heavy speakers from a nearby church, and if they are unlucky, they have two or more on just one street.
Then there’s the mosque with its early morning alarm. In all these, you may also find a school or more in the same area, where happy children blare off in rhymes and songs, oblivious of the amount of noise they make at their assembly ground.
Some residents will deal with these and if there is a football viewing center just by the corner of their home, the matter becomes even worse.
While the football fans are excited about an upcoming season, residents are worried about their evening rests especially on nights when two star English or Spanish clubs meet.
Then the one that almost everyone is guilty of, ‘generator’. In the name of generating power where the Discos have failed, the comfort of a neighbour is slaughtered at the altealtaryours.
In every nook and cranny of the city, there is something or someone consciously or consciously generating noise without recourse to the hazard noise could cause to other people.
Read Also: Struggles, Pains Of Single Mothers And Society’s One-Sided Backlash (Exclusive)
On October 15, 2014, the then governor of the state, Babatunde Fashola now Minister of works and housing had introduced what he called “horn free day”. Where motorists in the city would have to resist the thrilling temptation of blasting their car honks.

According to him, “What we see in a way that we now choose to live is that because we live in a very noisy environment, which we can really diminish, we tend to be very noisy ourselves. We speak at the top of our voices, we play music at very high decibels and we do very many things at very high levels”.

Many observers described the initiative as highly successful with a success rate of 70 percent.

Information Nigeria, in a chat with George Nwosu, a health practitioner at a private hospital in Lagos and he had this to say about why Lagosians must minimise the noise they make.

According to Dr Nwosu, whether or not you’re used to a certain type of noise, it can still lead to serious psychological disorders and, when that happens, you may not even know it because you have become too used to it.

He noted that high noise levels can contribute to cardiovascular effects in humans and an increased incidence of coronary artery disease.
He said “Coronary artery disease (CAD), also known as coronary heart disease (CHD) or ischemic heart disease (IHD), involves the reduction of blood flow to the heart muscle due to build-up of plaque in the arteries of the heart. It is the most common cardiovascular disease.”
When exposed to noise for a long time, Nwosu says it can cause a range of health problems such as stress, poor concentration, productivity losses in the workplace, and communication difficulties and fatigue from lack of sleep.’
He noted that ” when noise becomes too much, people tend to become easily irritable, nervousness, irrational in decision making.”
He adds that it goes even worse to causing health conditions ranging from  “cardiovascular disease, cognitive impairment, tinnitus and hearing loss.”

What has contributed to the excessive noise in Lagos?

An environmental expert, Titilayo Ekundayo says ” rapid urbanization is one major culprit of noise Lagos.
She describes noise in two categories, indoor and outdoor environmental noise pollution which she says could cause adverse health effects on babies in the womb, newly born,  little children, adolescents and adults.
She said ‘on Lagos roads, finding outdated vehicles which should have been put away for many years isn’t strange.
“Then you also have increased traffic, congested residential areas, crowded educational institutions and workplaces, unregulated commercial and industrial noise, which have become a source of noise pollution with long-term disability. “
“You must have seen herbal drug sellers and music CD sellers or Disc Jockeys with heavy speakers just to advertise or draw attention to their business.”
“Some churches hold vigils and turn on all their speakers causing noise that could cause sleep disturbances which have been known to cause serious long-term health consequences,” she stressed.
She explained further that, of the people to be given full protection from noise pollution, “Pregnant women, foetus, nefetus, infants and children top the list.”
How can we reduce noise pollution?
She says this can only be achieved when “there is proper monitoring of schools, workplaces, commercial and industrial areas to check the noise levels generated. ”
She added that “There should also regulation of traffic noise to be within safe limits. Bus-stops, railway stations and airports should not be situated in residential areas.”

What noise does to you

Anyone who lives in a very noisy area can attest to one or more of these.
Poor sleep
You’re thinking of taking a nap, but the blaring sound from “Baba jedi ” speakers are having a toil on that simple decision because all you can hear is how one herbal drug cures all types of ailments including death.
Let’s not forget to mention the dangers associated with irregular sleep or not sleeping well at night on your day.
Noise interferes with your speech
You most definitely can’t have a meaningful conversation in a noisy environment.
Poor concentration
This is one of the banes of noise pollution which affects everyone including the culprit of pollution and has long term disadvantages such as making hasty or poor decisions.
You find yourself spending long hours doing something that should have been done at a shorter time and so on.
In all these, it because imperative for Lagosians to make a very conscious effort to tone down the noise they generate.