Man Machetes His Brother For Having Secret Affair With His Wife

A Facebook user AbdulKareem Lukmon has taken to his page to share the story of a man who attacked his younger brother with a machete over the allegation that he was having a secret affair with his wife.

According to the user, the incident reportedly happened in Abaji area of Abuja. 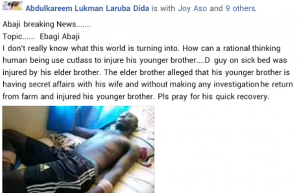