The indigenous rapper added that people would want to deny the fact.

Ycee made this known via his official Twitter handle on Sunday, 24th November.

Read Also: Ycee Laments, Says Naira Marley’s New ‘Legwork’ Is Too Hard For Him To Learn

See what Ycee tweeted below; 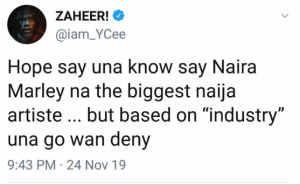