Fast-rising Nigerian singer, RaymondFix, has advised men dating Igbo girls not to brag about their dad’s wealth because the girl might end up dating both of them at the same time.

The singer then concluded by saying he made the statement out of personal experience. 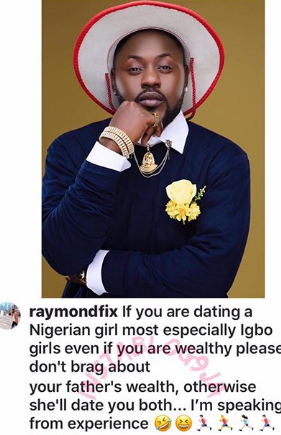 Raymond Fix is a super talented artist that has been writing and singing at the tender age of 11. After a few self-taught lessons in different studios, he began to explore the depths of his music while in high-school as a member of a now-defunct music group called Peacemakers.