Controversial Nigerian singer, Zlatan Ibile, has raised the alarm that former BBNaija housemate, Tacha, may have blocked him on Instagram.

Speaking via his official Twitter, the controversial singer further stated that Tacha is the only housemate he knows from the last edition of the reality TV show.

“That KILORUN was the last trouble I cause !! Time to cause another one with the new video I’m about to drop. Seems Tacha Blocked me. Na only her i sabi for the house sha, before she comot”, 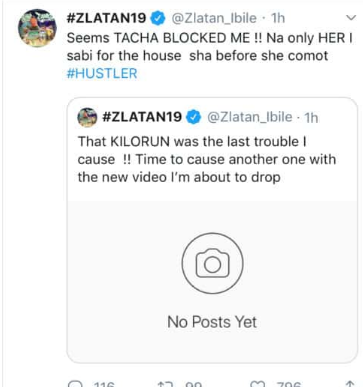