Home Trending There Is Nothing Wrong In A Dad Taking His Daughter For Virginity...
Facebook
Twitter
WhatsApp

Nigerian actress, Halima Abubakar has reacted to the report about rapper T.I taking his daughter to the doctor every year to confirm her virginity.

According to Halima, this act by T.I is not wrong as even her own father did the same thing to her when she was young.

The actress revealed that her dad did this to her three times and, although, she hated him at first but somehow forgave him.

”I don’t see anything wrong in checking if your daughter is still a virgin. I remember my dad taking me to see different doctors, just to be sure. He stopped after the 3times. I hated him then a bit. BUT HE IS JUST A FATHER TRYING TO PROTECT HIS STUBBORN DAUGHTER” 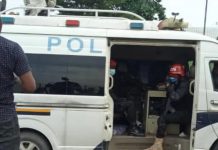