Rave of the moment, Zlatan Ibile, has appealed to Nollywood actress, Funke Akindele, for a feature on the popular TV series, Jenifa’s diary.

The singer made this appeal in a live Instagram chat/video with the actress.

During the live session, the actress prayed for the singer in her native Yoruba language that: “We will both remain successful, may we not be put to shame, God has made us the head, may we not fail. Zlatan.”

While the prayer session continued,  Zlatan who looked more interested in the movie role quickly told the actress that: “Please ma, don’t forget me for the next episode oo,”

Responding, Funke Akindele promised to hook him up very soon. 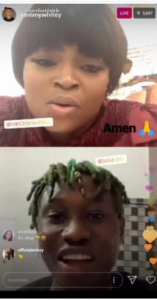