Shortly after controversial US-based Nigerian singer, Speed Darlington, took to his official Twitter handle to announce that he intends to sell the iPhone 11 gifted to him by Zlatan Ibile because he has been avoiding him, the latter has finally reacted.

In his response to Speed Darlington’s tweet, Zlatan asked the controversial singer to keep the phone, adding that he would also send the price tag he placed on the phone to him.

Read Also: I Was A Bricklayer Before Winning A Car Gift: Zlatan Ibile

He equally promised to call him later in the night. 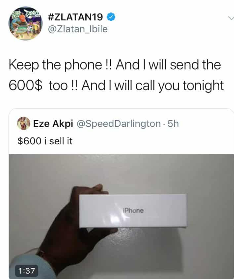