Home Trending All We Do Is Watch Netflix, Touch Lips, Laugh At People On...
Facebook
Twitter
WhatsApp

Popular Nigerian singer, Simi, has revealed that she and hubby, Adekunle Gold, only watch Netflix, touch lips and laugh at people on social media whenever they are at home.

The singer made this known after a Twitter user, @-eghosa stated that he just imagined what the two singers would be doing at home.

The user wrote: I just imagine Simi and Adekunle at home. They ‘d be singing all over the place.

Reacting, Simi wrote: Ew. Why do pple think this? Lol All we do is watch netflix, touch lips and laugh at people on Twitter. 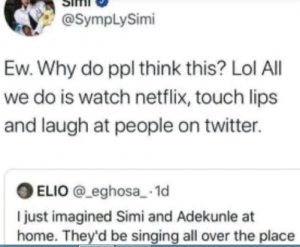