The senior pastor of Daystar Christian center, Sam Adeyemi, has aired his view as regards the origin of Christmas celebration following the controversy it generated recently.

Speaking via his Twitter handle, the respected cleric stated that ‘sense would one day fall on us’ adding that the countries from where Christianity was propagated have an uninterrupted power supply and we ‘Nigerians’ are busy debating whether eating Christmas chicken would make us miss heaven or not.

Read Also: When Those That Should Enforce The Law Break It, It Weakens Everyone: Sam Adeyemi

He concluded by saying he prays that it won’t take long before the sense fall on us. 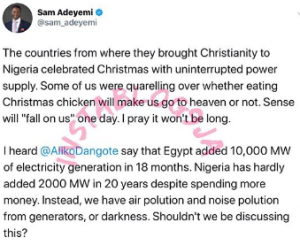