Popular Nollywood actress, Etionosa Idemudia, has been trending on social media in recent days after using the holy bible for an ashtray for her smoke.

The controversial actress didn’t stop at that as she vows to use the Quran for the same purpose if she gets the right amount of money.

Reacting to this, an Islamic cleric has taken to his Instagram page to vow to make the actress his wife before making her convert to Muslim.

Read Also: Bible Or Quran Is Not Responsible For Your Spiritual Mumu: Nollywood Actor Slams Etinosa

Also, he said he won’t stop at that, adding that he would also transfer her to his Sheikh so as to make her his third wife. 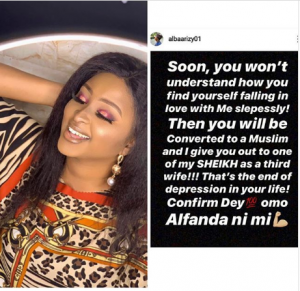