The former lawmaker representing Kogi West senatorial district, Dino Melaye, didn’t spare P.M news as he placed a savage curse on them over their headline.

Reacting swiftly to the headline, Dino wrote: It is you that will be crushed in Jesus’s name.

The news medium made the report following the defeat of the controversial ex-lawmaker by his political rival, Smart Adeyemi, of the All Progressive Congress. 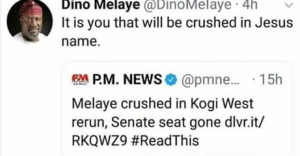