Flavour‘s alleged baby mama, Oluchi Ehiemere, has opened up more into the alleged romance between the singer and her.

According to her, the singer actually brainwashed her with promises of heaven and earth just to get in between her legs.

“Those of you out there calling me names and a liar, for your information I wasn’t and I am not a loose lady ok, @2niteflavour brainwashed and slept with me by promising me heaven and Earth, how he’s gonna marry me and establish my family, he even promised to buy me a car and a home, as long as I came through his friend that insurance covered me, won’t I like to be addressed as Mrs Flavour?

Immediately he set his eyes on me he was madly in love with me, he hasn’t seen any woman he loves the way he loved me in his life, he even vowed for me that he’ll never marry another woman even if in his next lives to come but me, he called me so many petting names like Mrs Flavour, Ezigbo Nwanyi, Nwanyi Mara Obi Di Ya, he further sang a song for me saying”

Where you go I’ll go, where you Lodge I’ll Lodge, your people will be my people and your God will be my God” he asked me the name I’ll call him which I told him Dim Oma, Best In The World Obi Nwunye Ya 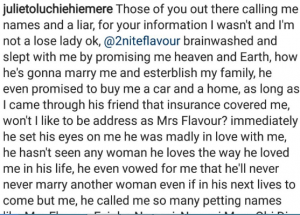