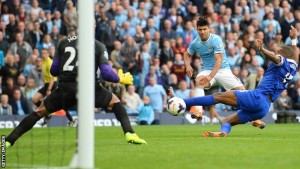 Wolverhampton further dampens Manchester City title hope after coming back from two goals down to defeat the defending champions 3-2 at the Molineaux Stadium during their domestic league clash on Friday.

Although the Citizens saw out the larger part of the match with 10 men after Ederson was given his marching order in the 12th minutes, Raheem Sterling’s goal either side of both half ensured the defending Champions raced into a two-goal lead.

However, Wolverhampton came back firing on all cylinders and ultimately levelled up before the 80th minute before going on to get the winning goal in the 89th minute.