Popular activist, Deji Adeyanju and other Nigerians demanding the release of Omoyele Sowore and others in detention were attacked in Abuja on Monday.

The protesters, led by Deji Adeyanju were at the National Human Rights Commission (NHRC) to demand the release of Sowore, Jalingo and others held up in various detention camps in the country.

The protest reportedly took a new turn when another group arrived at the venue declaring support for President Muhammadu Buhari’s administration.

This group, minutes after their arrival moved towards the anti-government protesters seizing their placards and pushing them away.

Adeyanju was attacked in the process and sustained some injuries. 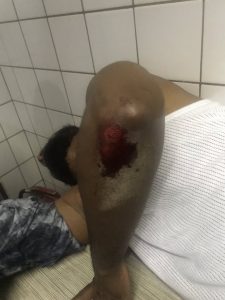