We reported earlier that controversial former Big Brother Nigeria housemate, Tacha, is currently in Ghana as a part of her media tour.

The reality Tv star was received at the airport by large fans who besieged the airport to receive her amid funfair and happiness.

Well, one person who is not pleased with how his countrymen have received her is Ibraa one, a popular socialite in the country.

Read Also: Blogger Slams Mercy, Says Ike Only Made Her Second Choice After Tacha Turned Down His Advances

Taking to his Instagram page, Ibraa one said while would his countrymen would be hailing ‘body odour’ who got disqualified from the show over lack of manners.

“Ghanaians love giving attention to unnecessary things and people. How can you be hailing ‘body odor’ who got disqualified because of lack of manners?,” 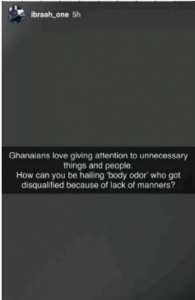