Ace Hollywood star actor, Will Smith has opened up on being diagnosed with a precancerous polyp and how it was found in him.

The 51-year old actor, in an interview with Ellen DeGeneres, revealed he had gone to his doctor for colonoscopy and intended to vlog the whole process.

“I thought it was fun, I was gonna vlog it, you know?” he told host Ellen DeGeneres.

“So, I was like, ‘Oh, this’ll be cool. I’m gonna vlog my colonoscopy…’ And I do it. So, we do the whole thing and I’m vlogging. And I was like, ‘Hey, it’s time now we’re gonna do—let’s do the final piece where the doctor tells me everything.’

“And she was like, ‘Oh, yeah, they found a precancerous polyp,’” Will continued. “I was like, ‘That’s not funny.’ And then all of a sudden it turned very real, you know? It was just a good thing that they removed it and it was really great.” 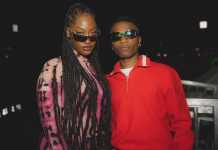 I Love Wizkid And That’s Not Going To Change: Singer Tems