Akin Alabi has taken to Twitter to tackle Twitter doctor ‘Aproko Doctor’ who shared some interesting information about Herpes.

According to Aproke Doctor, cold sores on the mouth are usually a sign of herpes.

What is on your mouth? Ah! It’s Malaria o, Heavy one! Ishinu o Dear Nigerian, That is not malaria, that is a sign of herpes Yes, you had a fever when you saw it, but it is not malaria. You usually see it when you are ill or stressed because they become reactivated

His tweet has since gotten many talking with many disagreeing with him as they believe that most cold sores are not as a result of herpes.

One of the people who had something to say is Akin Alabi who tweeted at the doctor saying;

Doctor, something that I had when I was less than 10 years old. I had herpes at 7? 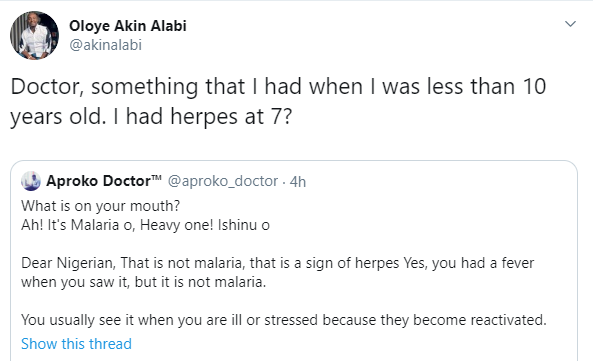