A certain unnamed housewife has reached out to Gistlovers(a popular Instagram blog) over claims that popular Yoruba actress, Jumoke Odetola, has snatched her husband named Biola Majekodunmi from her.

According to the lady who claims to be based in the UK, the husband lives in Abeokuta and the duo have been having regular sex despite the actress being fully aware that the man is married with kids.

See screenshots of her leaked chat below and additional report from Gist Lover blog. 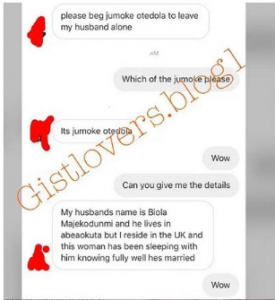 “Jumoke Odetola who is not new to this act is a Yoruba Nollywood Actress, she is presently in ‘gbenshing relationship’ with her Boss abi na her producer she dey call am, Mr Abbey Joni who is also a married Man. The aggrieved wife of Mr Majekodunmi has called on all Nigerians home and abroad to please come to her aid as the actress is about to relieve her of her duty of been a wife, I come in peace…” the blog concludes.