Ever wonder why popular Nigerian singer, Daniel Anidugbe also known as ‘Kizz Daniel‘ never made a bad song? well, the reason might be unconnected with his amazing academic ability.

The talented singer revealed that he graduated with an amazing 4.37 in engineering during his university days.

The talented singer made the revelation after a follower shared on his Twitter handle that he is surprised that the singer graduated with a first-class degree in engineering.

See their exchange on social media below: 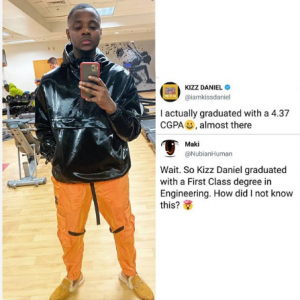