Samklef in his comment via his social media account advised the rapper to stop belittling himself just because of clout.

“Akon na old gee legend. Wizkid na new gee legend. I see no fault in Akon calling Wizkid my ‘lil bro.’ I did not expect that from MI. Never belittle yourself for clout. He should be able to set good examples. Akon na legend, Wizkid na legend.” 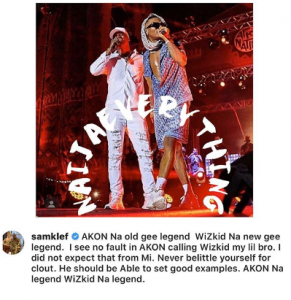