It does not look like the backlash popular Nigerian rapper, MI Abaga has been suffering from fellow singer, Samklef and Nigerians would end any moment soon.

Taking to his social media page, Samklef has launched a more scathing attack at the popular indigenous rapper and also described him as one who is capable of selling his birthright to his younger one because of money.

Reacting to Samklef’s comment, some Nigerians have explicitly stated that the rapper is someone who is capable of selling his birthright for akara(beancake) in return.

The rapper received the backlash following his outburst after American singer, Akon addressed Wizkid as his ‘lil bro.’

See what  they wrote below: 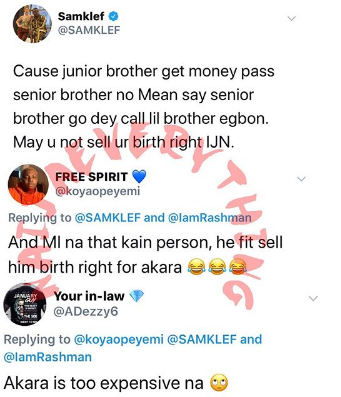