A man identified as sunny Anderson is currently trending on social after unconfirmed news emerged that he returned a whopping sum of N98 million which was mistakenly credited into his account despite having nothing.

According to reports, the said sum was said to have been transferred into his account by an Abuja based company. Upon receiving the alert, he subsequently proceeded to the bank where he explained to the officials that he was not expecting such amount of money on his account.

See screenshot of his bank alert below: 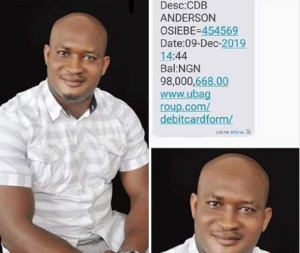