Home Entertainment Most People Think I Have Been Acting Way Before I Actually Even...
Facebook
Twitter
WhatsApp

Nollywood actress, Moyo Lawal, says people actually thought she has been acting way before she actually began the trade.

She made the comment in an Instagram post while advising her fans to do their jobs so well that people would get confused as regards how many jobs they have actually done in reality.

“Do your job so well that people will even argue that you are on shows that were done were before your time…… to me oooh , I have seen like a million episodes of Mr Bean 🙈 …… …….. p.s most people think I have been acting way before I actually even started sef.” 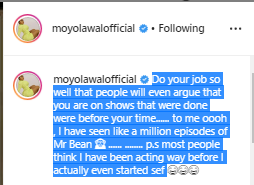