Nollywood actor, Yul Edochie has revealed that during his early days of acting, the mention of his dad’s name, Pete Edochie, made him lose acting role because of jealousy and envy.

He further explained that this is so because politics is played across everything in the country and not only in Nollywood.

He said his resolve not to give up moulded him into what he is today.

“Politics is played in every country and in every industry, not only Nollywood.
Ask people in other fields. In my early days I was dropped many times too because of my father’s name, it made many envious. But I never gave up”. 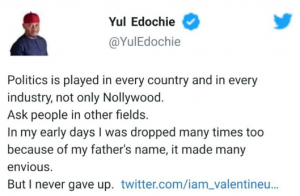