Fast-rising Nigerian singer, Afeez Fashola also known as Naira Marley has stated that he is not in competition because everybody can win.

He further stated that nobody has to lose for him to succeed in life.

He made this known via his social media page on Saturday, 28th December.

Read Also: Biodun Fatoyinbo Will Invite You To Perform At His Church: Davido Tells Naira Marley

The singer’s musical career witnessed a meteoric rise following his running battle with operatives of the Economic and Financial Crime Commission(EFCC) after he was accused of internet scams.

No competition because everybody can win, nobody has to lose for me to succeed. 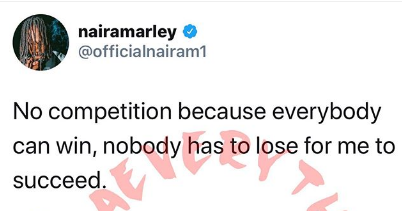