Actress Dayo Amusa and a fan clashed after she was accused by the latter of being used and dumped by popular fuji singer, KWAM 1.

It all started with the actress sharing a photo on her Instagram page and the follower tagged her a confirm prostitute adding that it was that reason that made the fuji singer kicked her out of his house.

Read Also: “Men Only Need Space To Have Sex But Women Need Reason To Have Sex”, Says Dayo Amusa

Reacting to the comment, Dayo said the fan is definitely frustrated and depressed. She then called on her other followers to pray for the fan so that she does not commit suicide over her matter. 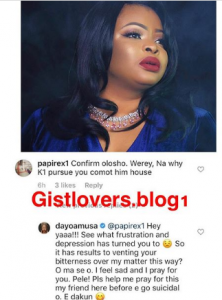