OAP Kemi Smallz has wasted no time in putting a troll in his place after the latter tried to body shame her.

Kemi had shared a beautiful new photo of herself on her page and in no time irked the troll. The photo saw Kemi posing with her shirt slightly opened and exposing her cleavage.

Read Also: Stop body shaming me or else I will sleep with your fathers- Ahneeka

Wasting no time the troll asked Kemi if she intentionally enjoys unbuttoning her shirt to show her ‘fallen breasts.’

‘Yes, I Deliberately, wilfully, purposefully, consciously, intentionally did . I have the perkiest titties my darling but then again, so the fuck what if they are fallen?’ 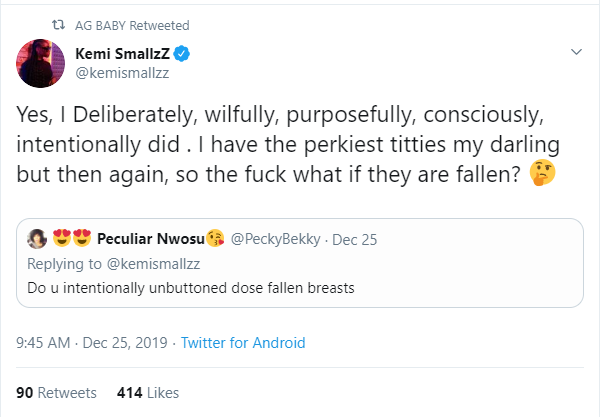