Popular Nigerian singer, Ayodeji Balogun popularly known as Wizkid is currently trending on social media after a photo wherein he was spotted with legendary actress, Genevieve Nnaji hit the internet.

In the photo, the singer was seen with the actress at a concert with Wizkid wrapping his hand around the actress’s neck.

He was then seen whispering into the respected screen diva’s ear.

Read Also: I Only Look Back To See How Much I Have Come, Says Tiwa Savage

Since the photo broke out, fans have been saying that Wizkid likes big things – a reference to the perceived relationship between the singer and Tiwa Savage. 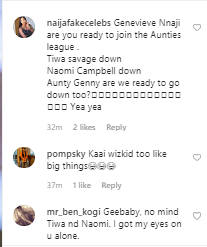