2019 former Big Brother Nigeria housemate, Diane Russet, has got fans talking on social media after photos of how the reality TV star stepped out for the premiere of comedian Ay’s Merrymen movie surfaced.

In the photo, the beautiful reality TV rocked a yellow jacket while flaunting major cleavages with the choice of her inner singlet.

Read Also: How Did She Get To Final With Her Maggot Dancing Step? Actress Bidemi Kosoko Reacts To Diane’s Eviction

The self-styled Kaduna-baby girl was evicted from the show following a lucky dip from Frodd during the finals of the reality TV show. 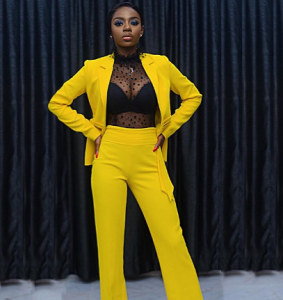