Tacha‘s management, Blizz Vision, has issued an unreserved apology to her South African fans over her inability to make it down to the country on Thursday.

Read Also: Blogger Slams Mercy, Says Ike Only Made Her Second Choice After Tacha Turned Down His Advances

This was made known in a tweet sent out via the official Twitter handle of the management company which cites unforeseen visa issues as they cause of her inability to make it down to the country.

“Dearest Titans, This is to duly address the South African Titans. Due to unforeseen visa issues, Tacha won’t be able to make it down to South Africa this Thursday. I’m aware that a lot of plans have been put in place for this engagement, Billz Vizion”. 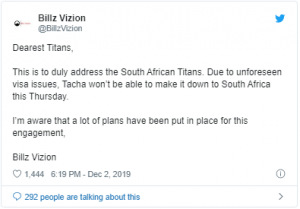