Former Nollywood actress Victoria Inyama has shared her thoughts on the trending issue between Sowore and the DSS.

Recall Sowore was re-arrested in court shortly after it was announced he had been freed.

Read Also: Victoria Inyama Celebrates As She Graduates From University

Reacting to this, Inyama wrote; ” I weep for Nigeria ooooo

All d legal luminaries are drinking water and minding their business. Dss answers to who pls cause I am lost. Where/who is Dss taking instructions from..

To d extent they over ride a Judge’s ruling….

All d movers & shakers have relocated their families abroad so they are Not bothered. No one is asking questions. This is a Shame. A huge Disgrace. A lawless land governed by rouges & miscreants. Shame on Nigeria’s judiciary, I saw Lawyers recording when they are supposed to be speaking & acting. Lawyers looking lost and confused while vagabonds attacked a man. Where are d big daddies from their big churches..shame

. Y’all excited about American musicians whilst d people sacrificing for your freedom are locked up. Pls can someone tell Sowore to drop this fight & relocate. He’s eligible for citizenship in any foreign country. Fighting for Nigerians In Nigeria is guyed masts” 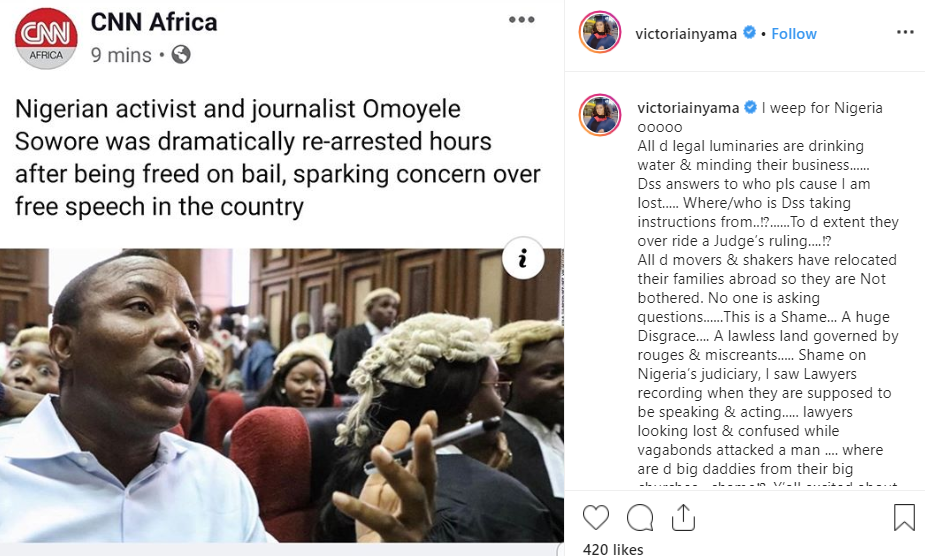