Home Entertainment What Cardi B Mixed With Her Stout That Knocked Her Off: Cubana...
Facebook
Twitter
WhatsApp

Social media was abuzz on Friday night after it emerged that popular American rapper, Cardi B, was knocked off after taking just one bottle of stout.

Read Also: Cardi B Meets Shadyville, Comedian Who Went Viral After Mimicking Her On Social Media(Video)

Speaking via his official Instagram page, he stated that the singer mixed her Stout with Champagne and that was why she was knocked off.

Champagne X Stout. Na wetin knock off Cardichukwu Chioma. It can only be Cubana. 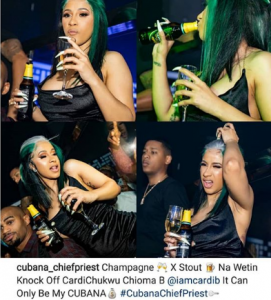