Controversial male barbie, Idris Okuneye, popularly known as Bobrisky has revealed what he would to haters who don’t like his lifestyle in 2019 when the new year begins.

Speaking in an Instagram post on Monday, 23rd December, he said he would put pepper in his haters’ eyes in 2020.

The controversial figure only recently returned back to the country from Dubai where he and bestie, Tonto Dikeh, were holidaying.
He wrote: 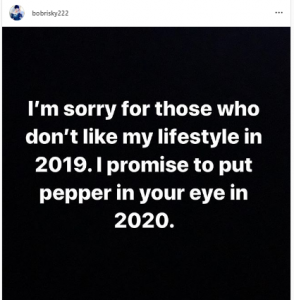