Controversial singer, Afeez Fashola also known as Nairamarley has cried out that his teachers lied to him while he was in school.

Speaking via his official Twitter handle, he went on to share some witty words which are popular with school but means something else in life.

“When I was in school they lied to me.
I was told:
Pussy was a cat
Sex meant gender
Bitch meant female dog
Bang was a sound
Rubber was an eraser
Head’s part of the body
Balls meant a round toy
Nuts like groundnut/peanut
Every time I use them in my song radiostations always muting” 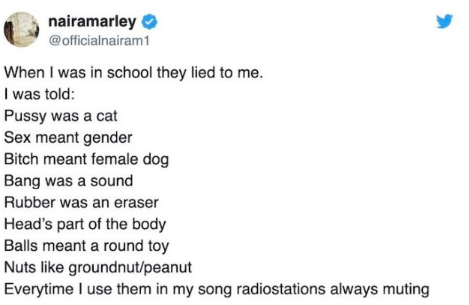