Ace OAP Diplomatic OPJ has finally opened up on what really happened on him leaving Wazobia FM.

According to the media personality, the president has nothing to do with him leaving the station as being reported in the news.

WHY I EXITED WAZOBIA FM AND NEVER CAME BACK ON ON AIR TILL NOW:

It should be noted that I voluntarily left RADIO NIGERIA /METRO for WAZOBIA FM after 16 years of MUSIC PRESENTATION in 2008, that was my 1st stint in pidgin broadcasting.
I was employed in WAZOBIA FM to standby for the opening of WAZOBIA FM PORTHACOURT.
Meanwhile, in order to keep me busy, I was made to be casting the news on MATSE’s belt in the afternoon, while OMOTUNDE (Lolo 1) was casting the news on YAW,s morning belt. But Fortunately, and as I was reluctant to relocate to PH, one EYO on the evening belt, voluntarily resigned and moved to INSPIRATION FM, and I was immediately deployed to the evening belt to keep presenting on the evening belt, pending the readiness of PH branch.
Meanwhile, when PH was ready, the management resolved to keep me in Lagos because of my positive impact and productivity, but suggested that I trained someone else for PH, and it was AKAS BABA.
Meanwhile, Lolo 1 kept reading the news, though she also wanted to present a programme at the time too, so I had to relinquish my Sunday programme to Lolo 1 and that was how Lolo started presenting a programme, and the rest is history.
No doubt I created a tremendous impact on the radio, but unfortunately, when the Ekiti and Osun states elections approached, a black man within advised the management of WAZOBIA FM to keep me off air for 3 months compulsorily for fear of the government that’s intolerant of criticisms. Meanwhile, it was expected that my girls would continue with the programme , but unfortunately I decided to exit, and that’s when I realised that I wasn’t given such a long leave when I lost my wife, and all my girls in solidarity decided to quit too, it became clear that I was gone. Before my exit, my CEO then out of love for me, promised that they won’t let me go to another radio station, and that they would keep me on till I retire from broadcasting, but unfortunately I had to leave.
I also remember that, there was a salary-delay regime when payment was only due from the 10th of every new month, and I protested against salary delay that resulted in prompt payment for staffers till I exited, but I don’t know if they’ve gone back to status quo now. In Nigeria broadcasting history, the NBC hasn’t suspended or barred any OAP from radio or TV. It should also be kindly noted that, a lot of restructuring and reshuffling have taken place in WAZOBIA FM that led to the firing of many others to make up for my absence.
Lo and behold, in order to avoid any other pidgin station from giving them the run for their money, a campaign of calumny was carried out against me by instigating almost all competing radios through letters, voice calls and even in meetings to avoid me like a plaque.
The negative impression being given about me, was that the government would shut down any radio that dares to employ me, and you know that the fear of withdrawal of broadcast licence is the beginning of wisdom. This is the only way WAZOBIA FM would remain ahead of all other radios and this is the RADIO POLITICS that WAZOBIA FM management plays better than the rest.
It should be kindly noted that also that LASGIDI FM that’s incidentally the newest kid on the block and OMOTUNDE ( lolo1) the GM had concluded arrangement with me 7 months ago as it’s field commander on programme presentation. Though not surprised, LASGIDI FM is on now and nobody reverted back to me till date, and now, THE SHOCKER, do you know that, the head of human resources(INSPIRATION FM) then revealed to me earlier that a former colleague of mine suspected to be LOLO 1 told them that OPJ was a difficult person to manage, indirectly meaning that she won’t be able to manage me, and the rest is history.
I feel sorry for those who congratulated me ahead of LASGIDI upon getting feelers that LOLO 1 my former colleague was being made the manager and that they would start hearing me again , as the same Lolo 1 never called me to even tell me about LASGIDI up until now.
The HR had already tentatively scheduled that LOLO 1 would run the morning shift and shall run the evening shift, but here we are.
I write this to dispel rumours that Buhari’s government is responsible for my not being on any radio since my exit from WAZOBIA FM. I hereby exonerate PMB on this, but a pure radio POLITICS being played for a particular radio remain on top of the rest radios.
Under this situation, I know i shall be back on air again SOMEDAY, but I don’t know how soon and how long.
I thank you all for your love for me, God bless you. 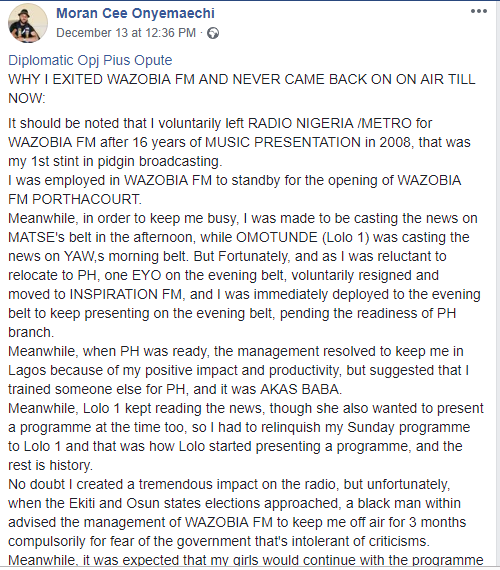 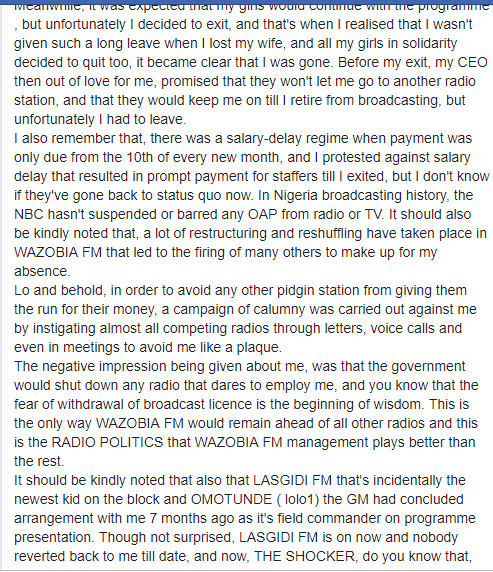 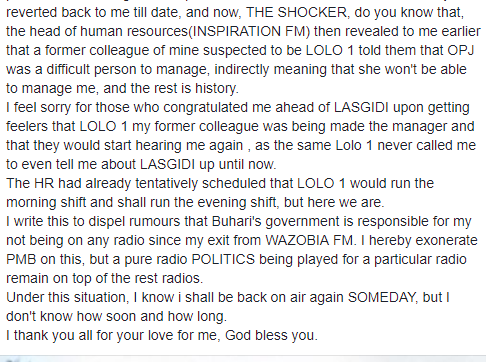